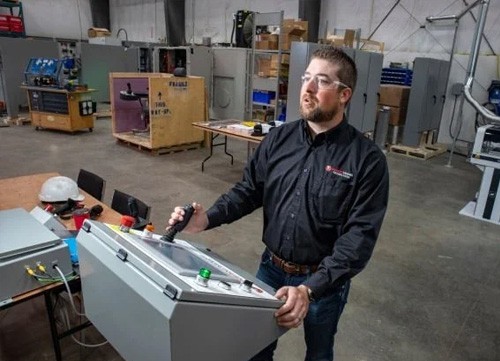 Variant Mining Technologies is calling it the biggest ore chute in the world. The Sudbury-based company said it built the chute for Rio Tinto’s Oyu Tolgoi mine— a combined underground and open pit copper mine in the Gobi Desert.

A chute is used to safely control the flow of rock from an ore pass to a truck, conveyor belt or rail car in an underground mine.

Derek Meloche, manager of business development and sales for Variant , said this project was the perfect match between what Rio Tinto wanted and what Variant could build.

“This system here is the first controlled, reliable, functionally safe truck loading system in the world,” Meloche said. “And that’s what Rio Tinto wants. It was kind of a perfect storm of the client driving exactly what they wanted for this particular project.”

“Primarily [we’ve] been a . . . I’ll say a local, domestic type supplier dealing within Canada and a little bit of the United States,” Meloche said.

“This has really put us on the map as far as being recognized as a global supplier.”